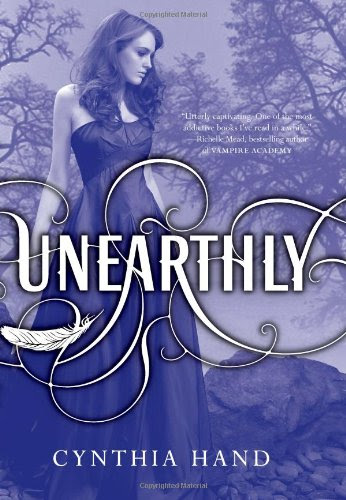 Clara’s mother is half-angel, which makes her quarter. She still has superhuman physical abilities, wings, and a purpose that she needs to fulfill, though. When her visions of reaching out to a boy standing in the midst of a wildfire brings Clara, her mother, and her younger brother to Jackson Hole, Wyoming, however, she does not realize the scope of what she has stumbled into.

At her new school, Clara meets and feels an instant connection with Christian, the school’s godlike idol and the boy of her visions. But her attempts to get to know him don’t seem to go right, and then Clara finds herself getting closer to another boy. Meanwhile, a new friend introduces Clara to more angel lore than her mother ever taught her, and it seems like something sinister is out there, just waiting to get them. Will these unexpected complications in her life steer Clara irreversibly off course from her purpose?

I thought the paranormal romance YA genre was truly done for. It seemed like every single paranormal romance YA I read in the past two years were, at best, shoddy imitations of Twilight, or shoddy attempts to be the anti-Twilight. But Cynthia Hand’s debut novel, UNEARTHLY, brings some much-needed quality back to this genre.

I enjoyed, and would recommend UNEARTHLY, because of its characters. Clara is a gem. Even she, I think, would make fun of all attempts to label her as a personality-less damsel in supernatural distress. Clara has a refreshing sense of humor and attitude. She is above the need to engage in high school drama, which makes the drama she does inevitably get involved in easier to read about. I also really liked her family, how the hidden depths of her mother’s character slowly unfold throughout the course of the novel, and Clara’s younger brother is wonderful, and their relationship, is so real, and relatable, despite the fact that, you know, they’re angels.

The love triangle was, I think, as reasonably good as a paranormal love triangle will get these days, in that both guys are actually very viable choices. Christian is the school god, yes, but he’s also just a really good guy. But so is Tucker, despite his initial rudeness towards Clara. You really can’t decide who Clara should end up with…though sometimes I suspect that Hand tries so hard to make both guys equal that they lose some appeal and realness as a result.

Definitely give UNEARTHLY a whirl if paranormal romance is your thing. And if it’s not, you can still give this book a try. It’s the best YA book about angels out there. I don’t think you’ll regret it.


Cover discussion: 4.5 out of 5 - This cover had me falling hard when I first saw it, and it's even more stunning in person, if you are lucky enough to see it.

Borrowed from library.
Posted by Steph Su at 9:45 AM