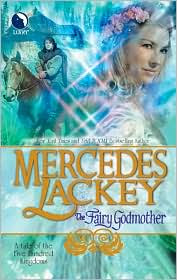 Elena’s miserable life as her stepfamily’s slave should’ve qualified her to have a Cinderella-like happy ending. However, things don’t quite work out that way. Instead, Elena becomes a fairy godmother-in-training. Her primary duty involves working with the Tradition, a powerful magic that tries to force people and situations into recognizable story arcs.

Being Fairy Godmother, however, is a lonely life, and Elena is not sure if her desire to love and be loved can handle such loneliness. Can she find a way to make everyone happy and get her own happy ending?

I have heard of Mercedes Lackey, of course—what fantasy reader hasn’t?—but, until this book, had not read anything by her. I picked up THE FAIRY GODMOTHER on a whim in the bookstore, when I was still on a post-Crown Duel high and desiring a similarly pleasurable fantasy read. THE FAIRY GODMOTHER definitely fulfilled that desire of mine. It’s a wonderfully unique concept, crafted by the hands of a master.

The most amazing part about this book is the thoroughness with which Mercedes Lackey explores an original fantasy concept. There are some pretty standard tropes in fairy tales: long-suffering good girl gets the prince, magic helps the overlooked but goodhearted and deserving third son, and so on. Lackey takes those common expectations and transforms it into the Tradition, a powerful and often dangerously insistent magical force that tries to carry out its tropes without any regard to people’s different wishes, and that must be appeased through subtle manipulations. It’s enchantingly clever, a new take on the fractured fairy tale, and would give someone like me oodles of delight as we consider how Lackey lays out the plot and rules in this world.

Overall, though, I thoroughly enjoyed THE FAIRY GODMOTHER on account of its wonderfully executed original concept. Upon finishing this book, I eagerly went out and found the other books in this series, and will look forward to delving into them when I get the chance!


Cover discussion: I was totally drawn by its fantastical-ness. The whimsical, feminine colors, the font... okay, and I didn't look too hard at the models, especially that man in the background.