Do You Have Mockingjay Fever?

Mockingjay is coming out in five--count 'em, FIVE!--days. All you need for that number is one hand. ONE HAND! After some people waiting over a year for this last book, it's almost here, and it's been really hard for me to think of much else.

Over the next few days I will be posting a number of Mockingjay-related posts, from predictions to playlists to post-trilogy gloom (and look at that alliteration right there). Feel free to come help me geek out over its upcoming release!


How will you celebrate Mockingjay's release?
I have several types of things planned for the rest of this week and the next, of course:

1. These posts. It's been fun, thinking of all these different aspects of this trilogy in a way I've never thought about books before.

2. Wearing my mockingjay pin. I really wish I had one of those all-good, legit pins, that looks like I imagine the pin Madge gave Katniss looks like. But! I have one that looks like this instead: 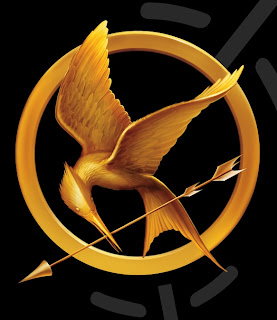 It's the image, printed on a black plastic/metal background, received from helping Big Honcho Media and Scholastic out with a Catching Fire promotion last year. I'm going to wear it all next week, see how many people on my campus tours will note its significance and approach me about it. Secret bookworms unite.

3. Attending a midnight release party. Specifically, at Children's Book World nearby. I was going to wait until the book arrived via Amazon, but I've decided I really cannot wait. So I'm going to get Mockingjay at midnight, and then read throughout the night. (To prep, I will, of course, try to take naps during the daytime, so I can finish reading the book.) 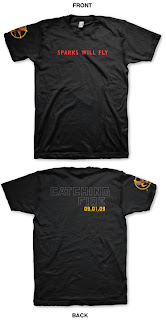 4. Wearing my Hunger Games t-shirt on release day. The bookworm nerdiness continues. I also received this Catching Fire promo shirt last year. It's more subtle than the mockingjay pin t-shirt that I've seen being sold in Borders, but, again, I'll have my pin, and the shirt as well, and with any luck, people will realize its significance when I wear it on Tuesday. I like my devotion to show itself subtly. I'm so excited. It's, like, the best excuse to wear this size extra-large shirt that I otherwise don't get to wear.

5. Talking up the Hunger Games trilogy to everyone! I've just about convinced my postman, a fellow bookworm, to read it, particularly when I pitched it as "a story set in the future where, each year, teens are selected to fight to the death on live TV." His eyes totally lit up with astonishment when I told him that was the premise for this young adult book, lol. And earlier this week, I let my friend borrow The Hunger Games. The next day, he asked to borrow Catching Fire. He finished both books in two days, and then reread them on the third night. I love sharing my love for The Hunger Games with others because it is a book that will genuinely interest a large range of readers (unlike Twilight, for example).

So tell me, how are YOU planning to celebrate the release of Mockingjay? Leave a comment with your answer and email address, and at the end of next week (Friday, August 27)--the last day of my week of mockingjay-pin-wearing--I'll pick someone and send a whole bunch of swag to you. Come party with me!
Posted by Steph Su at 11:06 AM