Review: Bad to the Bone by Jeri Smith-Ready 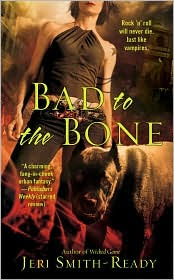 Con-artist-turned-radio-station-publicist Ciara Griffin broke the boundaries when she came up with the theme to disguise the station’s vampire DJs as vampire DJs—out in the public. The audience loves their vampire personas, but Ciara works hard to make sure no one knows that they’re really vampires.

With the holiday season looming, WVMP is attacked by a religious fanatic group illegally tapping into their frequency and broadcasting anti-vampire diatribes. With the aid of Shane, her beloved though definitely OCD vampire DJ boyfriend; David, her brooding but undeniably sexy coworker; and some old and new friends, including a lovable vampire dog, Ciara delves into the workings of a radical group determined to rid the world of vampires.

Author extraordinaire Jeri Smith-Ready set the urban fantasy bar high with the first book in her WVMP Radio series, Wicked Game. BAD TO THE BONE, however, continues right where Wicked Game’s excellence left off, propelling me once more into a engrossing world of vampires, mystery, memorable characters and relationship troubles.

In my review of Wicked Game I talked about the appreciatively multidimensional protagonist and vampires. Now, I wish to talk about other characters and the plot. BAD TO THE BONE contains an enviably colorful cast of characters that stand out due to their eccentricities and wonderfully unique quirks. In this installment we also get to see a deeper and necessarily darker side to Shane and Ciara’s relationship. A relationship between two such fundamentally different people—one a vampire, one a human; one neurotically methodical though determinedly devoted, the other more of a “think now do later” girl—is bound to have its problems. What will become of Shane and Ciara? I like that BAD TO THE BONE strews some doubts and insecurities into their relationship: this makes it much more realistic and beloved to me than a perfect relationship.

Jeri Smith-Ready has a way of constructing a world that’s so expansive, yet so complete, that you can either miss it all from being completely absorbed in it, or be in awe of her writing talents. (Or you can be both. Just, you know, not at the same time.) It seems to me that the books in this series usually take a while before finally getting into the action and the meat; that is because the beginning of the book is usually setting up the unusual circumstances that will be the grounds of conflict. While the main plot arc may be oftentimes buried in other, more interesting, albeit side-plots, I never felt confused or frustrated. I always just wanted more, more, more!

WVMP Radio is, in my opinion, one of the best urban fantasy series out there. Endearingly complex characters, a fully realized world, and the potential for future stories make sure that I’ll be glued to this series for hopefully years to come. Don’t miss out if you think this might be your type of book!