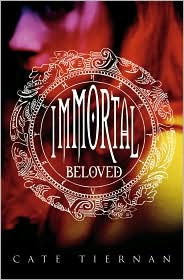 For the past 100 years, Nastasya has gallivanted around the world with her other party-happy immortal friends, enjoying life and not thinking of anything besides entertainment and distraction. But when her best friend does something that horrifies her and shakes the foundations of her belief about her existence, Nastasya runs away from her old life and joins up with a group of immortals who try to live to be good.

However, it isn’t easy for Nastasya to adjust to her new life. She doesn’t know what to make of her new acquaintances, particularly Reyn, a cold but inexplicably alluring golden-haired guy, and Nell, a preppy British girl who seems to have it in for her. And the more Nastasya learns about the history of immortals and her own, long dormant magickal abilities, the more she begins to understand the truth about her past…and how it may endanger her.

Is it weird that I’m wavering whether to give this book 3 or 5 stars, and not something in between? (4-star books are my babies and not given out lightly. *hugs*) IMMORTAL BELOVED really did something for me. I lament the repetition in paranormal literature nowadays, but while immortality is not news, the careful way in which Cate Tiernan layered this story is something to take note of.

Tiernan incorporates flashbacks into the narrative in a way that doesn’t feel forced. At first we think we know what the smart-mouthed Nastasya is about: oh, just another poor little tortured soul of an immortal being who’s lost sight of her humanity until she meets the right person, or people. But the more time I spent with Nastasya, the more compelling I found her. Yes, she’s fallen into some despicable times and habits, but her flashbacks reveal her behavior to be a perfectly justifiable defense mechanism against some horrible memories. The flashbacks serve not only to illuminate her character, but also to add a sliver of suspense and investment with every page we read, so that while in the foreground nothing truly remarkable happens—Nastasya runs around a farm for reformed immortals and struggles to adjust to their ways—we can’t help but be sucked in.

Nastasya reminds me of some of my favorite paranormal/urban fantasy female characters: strong, a wiseass, independent enough not to obsess over Reyn, despite his sullen bad-boy hotness. She’s attractive because she refuses to play the “docile, hurt female” role expected of her, and so I can see why Reyn is attracted to her (thank God for the absence of inexplicable paranormal romantic attraction!).

IMMORTAL BELOVED is admittedly slow, especially if you feel like flashbacks are a cop-out from true plot. However, the characters have convinced me of their interestingness, and Nastasya has secured my empathy and respect, so I will be really interested to see where Cate Tiernan takes us next. IMMORTAL BELOVED just might remind us paranormal lit cynics (yes, that’s me) that good writing and strong, well-developed characters can still take us all the way.


Cover discussion: 3 out of 5 - I suppose some people consider the vagueness of this type of cover pretty, but... eh.

ARC received from Around the World Tours.
Posted by Steph Su at 3:27 PM