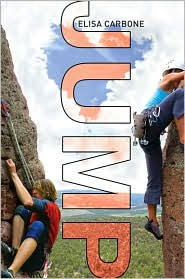 P.K. refuses to be sent to a reform boarding school by her parents. Critter escapes from the mental hospital. Together, they decide to live it up and hitchhike out west to in order to find some great rock-climbing sites, a hobby they’re both passionate about. Throughout their adventures, P.K. realizes the unique soul that Critter is, and the two misfits begin to fall for one another. But can their connection survive obstacles in the real world that threaten to tear them apart?

From Elisa Carbone comes a book that will take you to unexpected places…and not just in terms of the rock-climbing. JUMP is a beautifully written, marvelously well researched, and soulful story that is reminiscent of genre-defining books like Stargirl.

Elisa Carbone’s prose is poetry in motion. The chapters alternate between P.K. and Critter’s points of view, and the words follow the rhythm of their thoughts and actions: if they’re moving, the words are uncluttered, efficient, one after the other, and if they’re more contemplative, the words meander almost ethereally. Woven between this intricate prose is a confidence in subject detail that is rarely matched in YA lit: it’s clear that Carbone knows her rock-climbing lingo inside out. The rock-climbing language that P.K. and Critter speak may be unfamiliar to most of us, but its value is, once again, in its rhythm, of putting us right there on that rock face alongside the main characters.

Critter reminds me a lot of Stargirl in Jerry Spinelli’s classic eponymous novel. Both are people who seem to “get” the truth about living and this world a little more than the rest of us think we know best. As a result, it’s fascinating to read about Critter, to see him from both his eyes and P.K.’s. Regardless of whether or not you can relate to the characters, the two of them together make for an eye-opening reading experience, and Critter’s explanations of how the world works in particular should linger on your mind, maybe even become embedded in your own personal philosophy.

The plot I felt was perhaps a little uneven at times, in that it was too easy for me to put the book down and go do something else, because nothing altogether tangible really connects the golden strands of these characters’ developments together. However, JUMP was still a worthy read, and I’ve found passages of the book still turning in my head even now, weeks after I read it. Read this if you, like P.K. and Critter, think you’re ready to make that jump into another level of YA lit, one that forces you to reevaluate your life philosophies and priorities.


Cover discussion: 3.5 out of 5 - It didn't really attract me at first because of the models' awkward poses, but it's the kind of cover that grows on you, I think.

ARC received from Around the World Tours.
Posted by Steph Su at 8:00 PM

Email ThisBlogThis!Share to TwitterShare to FacebookShare to Pinterest
Labels: 3.5, elisa carbone, review, YA