Review: The Lighter Side of Life and Death by C. K. Kelly Martin 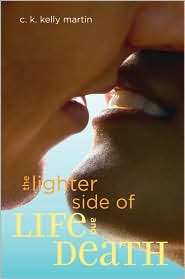 Closing night of his school theatre’s performance, Mason’s life seems to be falling into place perfectly. It’s a great performance, with a wonderful afterparty, and to top it all off, he loses his virginity with Kat, his best friend whom he has always kind of had a crush on.

Unfortunately, Kat starts acting strange towards him, wanting to pretend like nothing happened. Confused and hurt, Mason turns to someone new he meets: a 23-year-old friend of the family named Colette. Mason can hardly believe that Colette wants him as well, but as attraction fails to blot out other issues in both of their lives, Mason is forced to evaluate his actions, what he really wants, and what is worth it.

C.K. Kelly Martin’s third novel, THE LIGHTER SIDE OF LIFE AND DEATH, is a nuanced tale of the complexities of contemporary romance. It doesn’t quite have the punch and memorability I seek in contemporary realistic fiction, but it will nevertheless find fans among those who like their love stories quieter and subtler.

I adore Mason, the protagonist, in a way that is less than adulation but more than pleasant enjoyment. He is the realest boy I have read about in a long time, with typical male desires for female attention and a conflict-free lifestyle, but with the determination to get through the hardest parts of his life with as much dignity and open-mindedness as possible. As I was reading I kept thinking, YES, this is how a boy thinks! even though I clearly have no personal experience—but it felt right, the way C.K. Kelly Martin portrayed Mason’s thought processes.

The two girls, Kat and Colette, were less fleshed out than I would’ve liked, paling in the shadows of Mason’s three-dimensionality. Mason likes to say that Kat is adorable and alluring, but I never really saw her being as cool as he described her to be. Mason spends a lot more time and space in the book with Colette, and so I can understand her conflicts a bit more, and their affair works for me despite its unconventionality and taboo implications.

Overall, THE LIGHTER SIDE OF LIFE AND DEATH didn’t take me by surprise or anything, but it was still a smooth read that I was invested in while I was reading it. C.K. Kelly Martin will either strike the perfect chord with your contemporary fiction desires, or else be a nevertheless intriguing book that was obviously skillfully written.


Cover discussion: 2.5 out of 5 - I like the look of all of C. K. Kelly Martin's covers, but this one did the least for me. After reading the book, I felt like it simply didn't evoke Mason's story.

Review copy received from publisher.
Posted by Steph Su at 10:15 AM