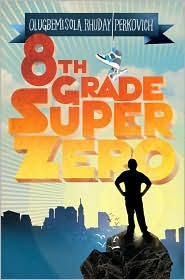 Reggie Knight’s eighth-grade year did not start out well. An unfortunate incident earns him the nickname of “Pukey,” his old friend bullies him constantly, and his dad has lost his job. In between hanging out with his two friends, Ruthie and Joe C., and volunteering at the local homeless shelter, he has no time to worry about an upcoming school president election.

However, getting to know the residents of the homeless shelter inspires Reggie to finally make his voice heard. He’s pretty sure he has good and genuine reasons for wanting to be school president, unlike the popularity contest it usually is. But does Reggie have what it takes to redeem himself from his loser status and be the next school president?

EIGHTH-GRADE SUPERZERO combines quality elements of literature into an incredible feel-good read. The varied cast of characters will win you over despite an oftentimes slow plot.

Reggie and his friends are eighth graders, but readers of all ages can easily relate to their interactions and the issues they face. Reggie is a sympathetic self-labeled underdog who never feels secondary to us: he is bullied, but he also has an inner strength that we can recognize even if he cannot yet. Reggie’s best friends, Ruthie and Joe C, are also fascinating and well-developed characters who could very easily be your best friends as well.

While it contains a great message, the plot of EIGHTH-GRADE SUPERZERO is unfortunately very slow. It takes over half the book before Reggie decides to run for president, which gets exceedingly frustrating as Reggie continues not to take action up to that point. There are a number of secondary plots—Reggie’s friendship with a young homeless student, his increasing dedication to the local homeless shelter—but, while they are well-developed, they more often than not took time that I think would’ve been better spent focusing on and tightening the main story.

Overall, however, if you have the time and patience to dedicate to this story, EIGHTH-GRADE SUPERZERO is absolutely delightful. This is a well-written story full of diverse (yet all fully realized) characters with lots of heart. I wouldn’t hesitate to recommend this book to others, and look forward to seeing what this talented author has for us next.


Cover discussion: 3 out of 5 - It's bold and simple and thus eye-catching!

Thank you, Olugbemisola, for allowing me to review your book!
Posted by Steph Su at 12:10 PM