Review: Bring on the Night by Jeri Smith-Ready 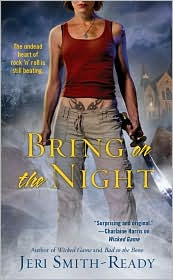 It’s been three years since ex-con artist Ciara Griffin’s last adventure with the undead. In that time she’s managed to almost complete college and stay with her vampire DJ boyfriend, the preternaturally hot Shane McAllister. But trouble never leaves Ciara alone for long. In fulfilling her obligation to the Control, Ciara stumbles across the existence of zombies, which point to malignant necromantic activity. But her biggest problems aren’t from beyond the graveyard, when something threatens to take all that she loves about her life away from her forever.

BRING ON THE NIGHT is the third of five planned books in the stellar WVMP Radio series, and it is clearly a turning point. Needless to say, it is impossible to be specific about anything that happened in this book without there being spoilers. In the interest of NOT being that person that messes up your reading experience, then, I will instead focus on how BRING ON THE NIGHT is yet another example of Jeri Smith-Ready’s world-building and characterization talent.

You would think that two people as in love as Ciara and Shane are with each other would get boring after a while, but this standout couple proves us wrong again and again. What makes Ciara and Shane consistently interesting is their deeply rooted differences—specifically, their faith, or the lack thereof. Shane’s struggle with the morality of vampirism as a result of his Catholic upbringing brings to mind other vampires’ famous moral conflicts (Edward Cullen, anyone?). It results in us occasionally wanting to just swat him upside the head and tell him to lighten up, you’re killing the mood—but damn, this boy is just completely and utterly adorable, the perfect guy to counterbalance Ciara’s recklessness and skepticism. And did I mention that he’s a talented musician as well?

The central plot pertaining to the zombies feels a little far-fetched at times, but mostly because they all play second fiddle to The Thing That Happens that I can’t tell you about. Still, it doesn’t take too much for us to adjust our knowledge of Ciara’s world to accommodate zombies and whatever else Jeri might want to throw at us next. That’s the beauty of her books: from the beginning, she weaves a world so complete that it begins to take on a life of its own, allowing us readers to stretch it as needed for us to believe in it. The strongest structures aren’t necessarily the most rigid: they’re the ones with just enough give and flexibility to absorb any shocks and new material.

BRING ON THE NIGHT marks a big change for Ciara, Shane, and all the other characters whom we’ve come to love. I’ll definitely be waiting to see what happens to them next!

ARC sent by author and publisher.
Posted by Steph Su at 11:00 AM