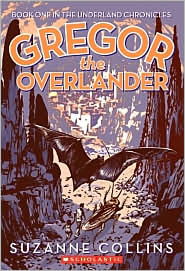 Book One in the Underland Chronicles
Tags: middle grade, adventure, war, series
Eleven-year-old Gregor thought he was going to spend his whole summer sweltering in his NYC apartment babysitting his two-year-old sister Boots and his deranged grandmother. But when he and Boots fall through a chute in his laundry room, they end up in the Underland, a scary world filled with huge, creepy critters, he doesn't realize that life as he knows it is going to completely change.
For the royal human family in the Underland thinks he is the long-awaited "Overland" warrior from a vague prophecy. The prophecy insists that Gregor--along with an odd assortment of allies that includes members of the royal family, spiders, cockroaches, bats, and even the dread rats--embark on a quest that may determine the survival of them all.
Even though he doesn't think he is the warrior, Gregor has a personal motive for going along with the prophecy: it's one way he can possibly discover what happened to his father, who disappeared years ago. That, and the thought of keeping Boots safe and getting back home to New York City, keeps Gregor along the path of mortal danger, and causes him to make decisions he never knew he was ready to make.
GREGOR THE OVERLANDER marks the beginning of a remarkably well-written fantasy adventure series for nine- to twelve-year-olds. It's been a while since I've read anything in this genre, so maybe I can't justifiably say that I thought characterization slightly lacking and the ending all too suden. Because I found tears pricking at my eyes at many touching moments in the book. Gregor is an admirable protagonist who grows throughout his adventure, and all of the supporting characters are interesting and unique in their own respects. Middle-school boys and girls alike will want to pick this book up, and for the rest of us who are anxiously awaiting the release of Collins' Catching Fire (the sequel to The Hunger Games), this is a great series that will engross us in the meantime.
Similar Authors
Margaret Peterson Haddix
Jeanne DuPrau (City of Ember)
Nancy Farmer (The Ear, The Eye, and the Arm)
Rick Riordan
Rating: 4 out of 5
Posted by Steph Su at 2:08 PM