Review: Me, the Missing, and the Dead by Jenny Valentine 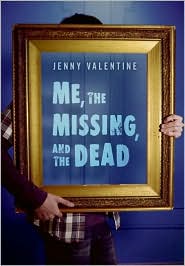 One night, 15-year-old Lucas Swain enters a taxicab company office and is immediately attracted to a strange urn sitting on the shelf. He learns that it contains the ashes of one Violet Park, a well-known pianist who lived in the neighborhood, and that the urn was left in the backseat of a taxi years ago. Lucas doesn't understand exactly why Violet called out to him from the dead, but he feels certain that it has something to do with his father's disappearance five years ago. Peter Swain, lifetime ladies' man and difficult to love, simply vanished into thin air one day, leaving behind a distressed wife with two children and another on the way.

The more Lucas finds out about Violet, however, the more he may be forced to admit that his father was never the hero that Lucas makes him out to be by wearing his clothes and clinging to memories of him.

ME, THE MISSING, AND THE DEAD has a simple but powerful premise. One may hardly believe that a story about a teenage boy who is obsessed with some lady's ashes would work, but it does, and it works beautifully. Lucas (by way of Valentine) keeps a morbid subject funny by constantly interspersing lists in different fonts and by having normal adolescent male observations about his older sister, his friends, and girls. Valentine's language is captivatingly easy to read, even delving into the mystical at appropriate times.

Ultimately this book is about family, forgiveness, and growing up. It should appeal to most audiences and makes for a good, lingering one-time read.

Email ThisBlogThis!Share to TwitterShare to FacebookShare to Pinterest
Labels: 3.5, jenny valentine, review, YA