Review: Now You See Her by Jacquelyn Mitchard 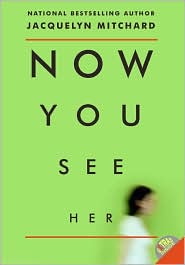 Tags: YA, acting, kidnapping, psychological disorders
Hope Shay—real name Bernadette Romano—is a talented fifteen-year-old actor whose desire to perform is ambiguously mixed up with her mother’s hardcore stage mother actions. We meet Hope when she’s at a strict prep-like school called Miss Taylor’s for supposedly faking her own kidnapping. Hope has got it good: the lead role in her prestigious arts school’s production of Romeo and Juliet, a blossoming acting career, the right clothes. So why would someone like her do what she did?
In her journal, Hope writes about always being prettier/skinnier/more talented than everyone else, and thus being the object of everyone’s envy. At Starwood, she has no friends except for her “boyfriend” Logan Rose, the good-looking senior with a score of commercials and TV roles—even a part in a movie!—to his name. Hope believes that they are madly in love, and Logan even talks of them running off to New York or LA together.
Then Logan hatches The Idea, which involves them faking Hope’s kidnapping, demanding a $20,000 ransom from her parents, and Logan dramatically rescuing her, thereby putting him in such good graces with her parents that they will allow the two teenagers to go wherever they’d like, school be damned. Strangely, however, as opening night and the initiation of The Idea nears, Logan seems to draw away from Hope, hanging out with another girl instead. Borderline desperate, Hope is convinced that the only way she can prove her love for him is to carry out with the faked abduction.
However, things do not go as planned, as Hope goes from being famous for her acting ability to being famous for being the harbinger of the hoaxed abduction…and learns a few startling things about herself and her life as a result.
NOW YOU SEE HER is sort of strange, but strangely satisfying. Hope comes off as a slightly whiny, narcissistic teenager, but through her journal entries and her revelations--not to mention the shocking ending--we come to empathize with her. I have not read Jacquelyn Mitchard's other books, although The Deep End of the Ocean is on my TBR bookshelf, and maybe I was a little too old to appreciate Now You See Her for what it's completely worth: a heartbreaking tale of one girl's attempt to find her identity in the highly competitive world of acting she's in. This book is a telling of an adventure such as only a drama queen can tell it…and it is really good.

Email ThisBlogThis!Share to TwitterShare to FacebookShare to Pinterest
Labels: 3.5, jacquelyn mitchard, review, YA