Review: Secrets of My Hollywood Life by Jen Calonita 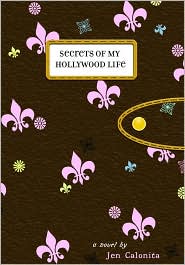 Tags: YA, Hollywood, undercover
Meet Kaitlin Burke. Oh, wait, you already know everything about her: phenomenal star on the soap opera Family Affairs, best friend with her costar Sky Mackenzie, and voted hottest teen star by practically every magazine out there....Or do you?
Life is not well in Kaitlin's privileged world. Sky, with whom she has never gotten along, is spreading nasty rumors about Kaitlin's prissy personality to the tabloids (descriptions that better suit herself, quite frankly). Her career-crazy parents and pushy publicist seem to be trying to drown her in a ton of work and feature appearances on talk shows. Her only respite is with her best friend Liz, the "normal" daughter of a powerful lawyer, who attends the normal high school of Clark.
Desperate to know what it's like to be a regular teenager, Kaitlin goes undercover as the nerdy Rachel Rogers, British import, at Clark. The experience is so much more than she expected, however. There are annoying Sky-like girls there as well--but "Rachel" makes friends, too, and meets an incredibly cute guy, Austin, who seems to like her for who she really is: a nerdy, Star Wars-obsessed math prodigy.
But Kaitlin is teetering on the edge of her double life. How will she deal with it when it all comes crashing down on top of her?
SECRETS OF MY HOLLYWOOD LIFE has been touted as "what it's really like to be a celebrity 'It' girl" (Us Weekly), but having had no experience in the Hollywood world, I don't know whether that is true or not. What I do know is that it's always nice to have a down-to-earth, unjaded girl for a protagonist, even if Kaitlin's character doesn't really ring to me. Same with the other characters. They're likable...but only to an extent, the same way you'd like, say, your assigned chem lab partner whom you never get to know really well. Still, the book is a fun romp through the L.A. glam life, perfect for those who are tired of looking at it from the self-satisfied top.
Similar Authors
Meg Cabot
Kate Brian
Melissa Senate (Theodora Twist)
Ally Carter (Cross My Heart and Hope to Spy)
Rating: 3/5
Posted by Steph Su at 9:30 AM