....is late this week because I went home this weekend for Valentine's Day and my dad's birthday, thus having access to all the books that came for me through PaperbackSwap, contest winnings, etc., as well as the lovely used bookstore that's near my house. I ended up getting so many books (for such a great price, though!) that I decided just to take pictures of them and list them out, so that this post isn't 1340982456 miles long. Cheerios. 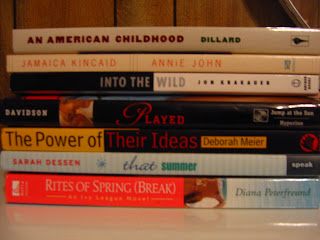 An American Childhood by Annie Dillard
Annie John by Jamaica Kincaid
Into the Wild by Jon Krakauer
Played by Dana Davidson
The Power of Their Ideas by Deborah Meier (read this for my Education class and really enjoyed it)
That Summer by Sarah Dessen
Rites of Spring (Break): an Ivy League Novel by Diana Peterfreund 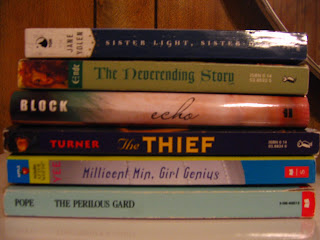 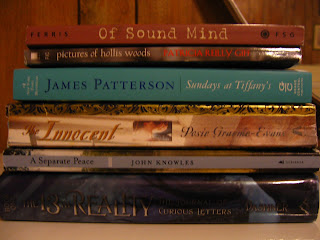 Of Sound Mind by Jean Ferris
Sundays at Tiffany's by James Patterson (won in a giveaway on Kaye's blog; thanks!)
The Innocent by Posie Graehme-Evans
A Separate Peace by John Knowles
The 13th Reality: the Journal of Curious Letters by James Dashner (from YA Books Central) 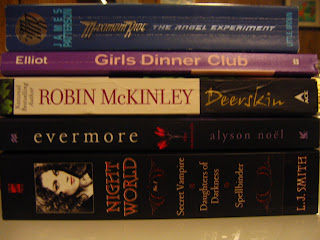 Creepers by Joanne Dahme - Heard about and really want to read The Plague, coming out in a few months, and so I borrowed this. Plus, it's really cool cuz it has color on the inside pages!
Poison Study by Maria V. Snyder
The Summoning by Kelley Armstrong
And also a few not pictured (cuz they are mostly rereads and I had put them away before remembering to take pictures of them):
The Portable Dorothy Parker by Dorothy Parker (unread)
On the Road by Jack Kerouac (unread)
Running Out of Time by Margaret Peterson Haddix
Among the Hidden by Margaret Peterson Haddix
Harry Potter and the Sorcerer's Stone by J.K. Rowling - I'm determined to collect the whole series in hardcover.
Harry Potter and the Chamber of Secrets by J.K. Rowling - ditto ^_^
Saving Francesca by Melina Marchetta - hardcover!! Because I love the cover on the HC copy. Problem, now, is of course that I now have TWO copies of this wonderful book. Hmm, what to do with my brand-new paperback version... anybody interested in trading? :)
Posted by Steph Su at 9:12 PM