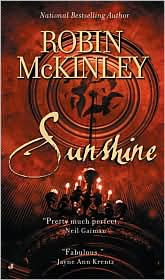 Tags: adult, vampires
Rae Seddon, nicknamed Sunshine for her love of daylight, is just your average young woman, with maybe a slightly greater-than-normal interest in the Others: paranormal creatures such as vampires, Weres, and demons. She's a master baker (her cinnamon rolls are to die for) at her stepdad Charlie's coffeehouse, and has a good relationship with her boyfriend Mel. Sunshine's life was going on fine, until the night she decides to drive out to the lake to be alone with her thoughts for a bit, and finds herself smack dab in the middle of an epic ongoing fight between two vampires, Con and Bo.
Once you're in the hands of vampires you're pretty much dead, which is why Sunshine is absolutely terrified of herself when she not only escapes, but manages to save Con from Bo's gang as well. Now she and Con are inexplicably and dangerously linked, and Sunshine is only beginning to realize her magic heritage and the extent of her powers--powers that are wanted by SOF, the "police force" that deals with the Others. Sunshine and Con must form the strangest alliance ever--between humans and vampires--in order to defeat Bo and save each other from sure destruction.
SUNSHINE is quite different from previous Robin McKinley's books I've read and loved. First of all, this IS an adult book, and so some of the themes and content may be uncomfortable for younger readers (although, knowing McKinley readers, most are pretty mature already). Sunshine is also an unusual narrator; I think of her as almost the Jessica Darling of the vampire genre, with her snarky, diary-like commentary, which I enjoyed most of the time except when it got dragged out a bit in the middle and you just wanted to get to what happens next, to the action!
I'm not sure how Twilight fans will respond to this one because vampires are not glorified in SUNSHINE, although Con is attractive in his looming, expressionless way. However, if you are looking for a paranormal book with an extremely strong female protagonist's voice, be sure to check this one out.
Similar Authors
Megan McCafferty (Sloppy Firsts, etc.)
Annette Curtis Klause (The Silver Kiss)
Rating: 4.5/5
Posted by Steph Su at 9:30 PM