Happy Superbowl Sunday! Who are you rooting for? I always love rooting for the underdogs, so goooo Cardinals! hehe. It's funny cuz not many people in my life are football fans, but it's one of the few sports that I do enjoy watching. You can find me in front of a TV every year on the first Sunday night of February.
I also enjoy the commercials, of course. I learned that it costs $100,000 per second of airtime for a commercial. Per second! That's a mind-bogglingly large sum of money. Imagine how many books one could get with that... *dreams*
In keeping with the spirit of the day (you'll begin to notice that I'm always a fan of keeping with the spirits of the day), the following is a football-related review of a favorite book of mine.
Dairy Queen by Catherine Gilbert Murdock 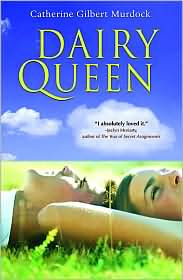 Tags: YA, farm, football
A cow. That’s what Brian Nelson calls D.J. Schwenk on the first day he works for their farm. D.J. is a cow because she does everything her injured but grumpy father tells her to do, which is basically to run the farm by herself, forced to give up her athletic passions along the way. Brian’s accusation may be harsh, even after he apologizes and they start becoming friends, but D.J. is forced to admit that what he said is true. Most people in the world, she realizes, simply do what they are expected to do, whether they know it or not.
And certainly a bigger group of cows there can not be than her own family, the Schwenks. They are poor and uncommunicative and repress their feelings when it would be better to speak up. As a result, D.J.’s older brothers don’t talk to the family anymore. Her mother hides away in her active principal’s office even during the summertime. Her younger brother Curtis speaks about once every blue moon, and her dad simply complains about D.J.’s faults without helping one bit.
The summer before her junior year certainly gives D.J. new things to think about. She’s stuck on Brian’s cow comment, for example, and how she can make herself stand out from the “herd.” She learns something shocking about her best friend Amber. Most of all, she’s experiencing a totally new emotion with Brian, who is popular, athletic (under her training, of course), smart, good-looking…everything she will never allow herself to hope for.
Maybe, however, junior year and her new decisions will make her life turn out a lot differently than what she expected.
DAIRY QUEEN was a joy to read! D.J.’s troubles may begin to sound like a soap opera after a while, but her down-to-earth farm-girl manner of talking keeps things fresh and interesting. D.J. may put herself down, but readers will not hesitate to want to befriend her, and to find out what happens in this great book’s sequel, THE OFF SEASON.
You'll like this if you also like...
Megan McCafferty
John Green
Rating: 4.5/5
Posted by Steph Su at 7:22 PM