Review: The Opposite of Invisible by Liz Gallagher 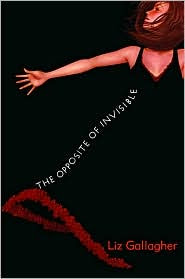 Tags: YA, love triangle, friendship, romance, art, Seattle
Alice and Jewel are the same person. Best friends since they can remember, they are both outsider artists; everyone thinks Jewel is gay because Alice is the only person he ever talks to, and Alice just doesn’t talk at all to anyone else. They both like the same quirky, gory, and eccentric stuff that can be found in Seattle. They are never apart, and yet no one else sees them. They are invisible.
However, as a high school sophomore, Alice is beginning to want something more. She has a major crush on Simon Murphy, a popular and gorgeous football player who is clearly out of her league. So Alice can hardly believe it when Simon starts talking to her. Pretty soon they are apparently an item—the oddest, most incomprehensible item the school has ever seen, perhaps. There’s no pretense about Simon when he’s around her, though. He is a genuinely good and sincere guy who understands his popular crowd is not all that great sometimes and envies the artsy crowd—Alice included—for being able to be themselves.
But her budding relationship with Simon puts a strain on Alice and Jewel’s friendship, which was so close they were practically a couple. A week ago Alice had no prospects; suddenly she is stuck choosing between two. Either she begins a new life with the guy of her dreams and explore a new social life, or she remains with Jewel and continues to be invisible to the rest of the world.
Which one will Alice choose? Or can she have both?
I absolutely loved this book because all the characters are so real. There are no annoying stereotypes because it seems like every character defies them. There are no easy answers because, well, that’s life, and Liz Gallagher portrays it so very sweetly. This is a short and quick read, but it will linger with you.

Email ThisBlogThis!Share to TwitterShare to FacebookShare to Pinterest
Labels: 4, liz gallagher, review, YA