Okay, these books are out already, but I have yet to find a copy of them, so they're considered being "waited on" in my book!
Daughter of the Flames by Zoe Marriott 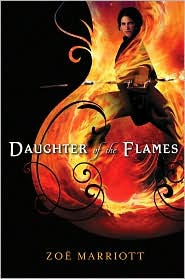 Inside an ancient temple in the mountains, fifteen-year-old Zira trains in the martial arts to become a warrior priestess who can defend the faith of the Ruan people. Bearing a scar on her face from the fire that killed her parents, the orphaned Zira is taught to distrust the occupying Sedornes. Terror strikes when the forces of the tyrannical Sedorne king destroy the only home she knows. To survive, Zira must unravel the secrets of her identity, decide her people’s fate — and accept her growing feelings for a man who should be her enemy.
Ooh, a strong-sounding female protagonist in a fantasy setting. My kind of book! Also, the cover is just really darn beautiful. I love the use of striking orange on a black background.
Here's another one by the same author, which also looks great... 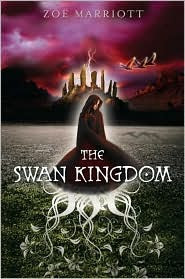 The Swan Kingdom by Zoe Marriott
Shadows fall across the beautiful, lush kingdom after the queen is attacked by an unnatural beast, and the healing skills of her daughter, Alexandra, cannot save her. Too soon the widowed king is spellbound by a frightening stranger, a woman whose eyes reflect no light. In a terrifying moment, all Alexandra knows disappears, including her beloved brothers, leaving her banished to a barren land. But Alexandra has more gifts than she realizes as she confronts magic, murder, and the strongest of evil forces, and is unflinchingly brave as she struggles to reclaim what is rightfully hers. Fantasy lovers will be held in thrall by this tale full of visual detail, peppered with a formidable destructive force and sweetened with familial and romantic love.
I absolutely adore retellings of fairy tales (Robin McKinley and Shannon Hale are two of my favorite authors) and so this one seems like something I would really enjoy. Hopefully I can get my hands on the two soon!
Posted by Steph Su at 10:36 AM