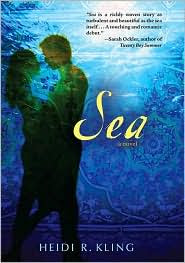 15-year-old Sienna Jones’ life has never been the same since her mother disappeared over the Indian Ocean on a charity mission three years ago. Sienna doesn’t surf anymore with her former best-friend-turned-hottie, Spider; she doesn’t go by her former nickname “Sea,”; and she certainly doesn’t go on planes anymore. But that’s exactly what her father is proposing: a two-week trip to help out at an orphanage in tsunami-torn Indonesia.

Initially, Sienna is apprehensive, but once there, she meets an unforgettable guy by the name of Deni. Deep and passionate, Deni helps Sienna reconnect to life in a way she hasn’t since her mother was gone, because he, too, has lost loved ones in the tsunami. Theirs is a fairy-tale love and understanding, so when Deni receives news that his father might be alive back in his old city, Sienna does not hesitate to go with him. What they find there, though, may be far more devastating than they can realize.

SEA is a wonderfully solid, emotional, and un-put-downable debut by a highly talented YA novelist.

Heidi Kling writes her characters with assured realness. Sienna thinks and sounds like a 15-year-old with a tragic past: she has the fears and (occasionally petty) concerns appropriate for her age and situation. Instead of finding her naivete annoying, then, Sienna’s (and, thus, Heidi’s) seamless teen voice completely won me over.

This is the first YA novel I’ve read that deals with the tragedy of the Indonesian tsunami, and it does it in an immersive, knowledgeable, and respectable way. Through Sienna’s eyes, we experience the strange and sometimes terrifying world of post-tsunami Indonesia without being overwhelmed or too emotionally distant. I loved the control that Heidi Kling has over her knowledge of Indonesian phrases, customs, and concerns. She writes these things—whether they be major scenes central to the plot, or simple details easily overlooked—with an appreciable confidence that makes us latch our trust securely on her as an author.

Perhaps more powerful in SEA, however, is the poignancy of the many different relationships within. With just a few lines of dialogue or description, each character wins us over. We are able to see Sienna’s father’s genuinely good intentions despite his being in the difficult position of being the father of a motherless teen girl. We understand Sienna’s trepidation at her father’s budding relationship with her former therapist. But most of all, we are completely able to believe Sienna’s relationships with two very different boys. To elaborate, Deni may be decidedly a guy who seems almost too perfect to be true, but the way his and Sienna’s romance unfolds has all the sweet subtlety of a truly sigh-worthy teen romance.

Sienna’s voice skews slightly more towards readers who enjoy a younger YA voice, but her experiences are anything but trite or age-limited. Read this, and I dare you to not in some way be affected Sienna’s unique and heartwrenching journey of discovery in Indonesia.


Cover discussion: 4 out of 5 - Doesn't that gorgeous cover just pull at your heartstrings with its beauty?

Copy borrowed from library.
Posted by Steph Su at 10:40 AM