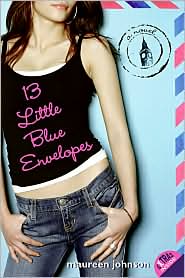 Tags: YA, Europe, backpacking, adventure, travel
Romantic, interesting, tender, and enviable: Ginny Blackstone’s journey of geographical and self discoveries in 13 LITTLE BLUE ENVELOPES is one that we all dream of. Who wouldn’t want to be sent on a backpacking trip across Europe and do things we’ve never thought we were capable of doing?
Ginny’s free-spirited artist aunt, Peg, died from a brain tumor. After Peg’s death, a package containing 13 sealed blue envelopes is delivered to Ginny. They send her on various missions across the seas in foreign lands. All of a sudden, Ginny finds herself lugging a heavy purple-and-green backpack onto a plane and into the London flat of a man named Richard.
Peg’s instructions in the envelopes further mess with Ginny’s once passive existence as they instruct her to, for example, find a struggling artist whose work she admires to give money to. How does Aunt Peg seem to know that Keith, the artist Ginny chose, would be so cute and steal her heart like that?
Despite the crazy, un-Ginny-like adventures she’s having, Ginny still has doubts every once in a while of what the heck exactly is she doing in Europe. Will Ginny ever come to terms with the fact that she IS capable of everything her aunt had once done?
13 LITTLE BLUE ENVELOPES is more than a fun ride through several European countries. It’s a journey of self-discovery for Ginny, as a shy girl learns exactly what she is capable of. For those of us who do not have a wild aunt who will send us on an adventure through Europe, we can live through Ginny. I have read this book twice, and both times I could not put it down, preferring to lose sleep rather than wonder about what happens to Ginny.

Email ThisBlogThis!Share to TwitterShare to FacebookShare to Pinterest
Labels: 4.5, maureen johnson, review, YA