Review: The Book of Luke by Jenny O'Connell 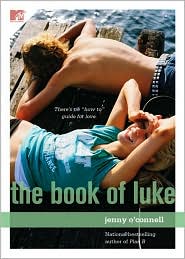 Tags: YA, love, moving, manners
High school senior Emily Abbott has always been nice. That’s what happens when your mother is a nationally known etiquette guru.
Well, look where nice has gotten her. Several weeks before Christmas, her dad makes the decision to move the family back to Massachusetts, where they grew up, and then several days later announces that he is going to stay in Chicago for a little while. Then her boyfriend Sean breaks up with her the morning she is leaving on her front step, in front of her whole family.
So Emily is done with being nice. Her old best friends Josie and Lucy welcome her back, and together they begin boy-bashing. Why are all guys so rude, oblivious, obnoxious, and just plain clueless? The three decide to put together a not-so-nice guide to set the guys straight.
But before they can reveal this information to everyone, they must test it first. And there is no better guy to test it on than Josie’s ex-boyfriend, Luke Preston, the hottest and most popular guy in school, who broke up with her through email. Emily is going to make Luke fall for her, give him a few lessons in guy etiquette, and then dump him to get back at him for what he did to Josie and other girls.
Except somewhere in the middle of her game, her actions stop feeling manipulative and start feeling…genuine. Emily is torn between her love for her sort-of boyfriend Luke and her dedication to her friends and their project. Her attempt to keep both by lying to everyone could just end up losing her everyone she cares for…unless she’s brave enough to come clean to everyone.
Jenny O’Connell has a real ear for teen dialogue and getting a great story going, and the result is a fun and charming book that’s worth reading.