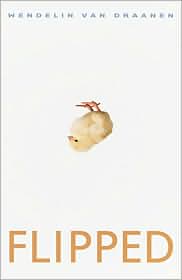 Tags: middle grade, YA, he-said/she-said, coming of age
The first time Juli Baker saw Bryce Loski's blue eyes that day he moved in across the street from her in second grade, she lost her usually intelligent mind. She spent the next 6 years chasing after him. Not 2 hours after moving into the house across from Juli's, Bryce knew she was dangerous. He spent the next 6 years trying to avoid her, and yet not being able to, because Juli Baker was everywhere, doing everything, often perfectly.
Their middle school years clash between a destroyed sycamore tree, Juli's homegrown chickens and their eggs, Bryce's widowed grandfather, and family problems and secrets. By 8th grade, Juli pegs Bryce as a shallow jerk. She is so over him. Meanwhile, Bryce sees something in Juli that he has never noticed before. Is it the way she talks about beauty and nature like an adult? Is it the way she reminds Bryce's grandfather of his spirited dead wife? Eighth grade will be one flipped year for the two of them.
This book is charming, funny, and well-written. Juli and Bryce are incredibly well-drawn protagonists who learn to grow up through the novel. More than being simply a story about their friendship/relationship, however, Flipped also touches on topics such as family, socioeconomic status, and mental illness. This is Stargirl for the younger set, but both middle and high schoolers alike will be able to empathize with the main characters and connect with their teenage language.