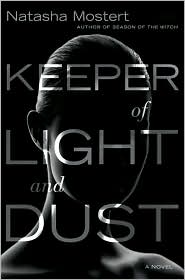 Keeper of Light and Dust by Natasha Mostert
A highly original supernatural thriller blending magic, science, martial arts, and the greatest desire of all: to live forever.

Mia Lockheart has a secret. Her mother was a Keeper, as was her grandmother-women who were warriors, healers, and protectors. As Mia practices her craft among the boxers and martial artists of South London, and begins a romance with her childhood friend, the fighter Nick Duffy, she has no idea that a man who calls himself "Dragonfly" is watching from the shadows.

Adrian Ashton is a brilliant scientist, an expert in the breaking field of biophoton emissions from cells within the human body. He is also a skilled martial artist-and a modern-day vampire. With the aid of the enigmatic Book of Life and Death, written in the thirteenth century by the legendary Chinese physician Zhang Sanfeng, he preys on other martial artists and drains them of their chi-the vital energy that flows through the body.

Mia finds herself drawn to his dark genius, but when he targets Nick as his next victim, she is forced to choose between the two men. It becomes a fight to the death in which love is both the greatest weakness and the biggest prize.
-
ShelfAwareness says that this book combines vampires, martial arts, and quantum physics. Tell me that, and I'm hooked! As a former astrophysics pre-major (who switched out because she didn't want to spend three hours a day doing problem sets), I'm interested to see how this author of Season of the Witch (which I have also never read, but sounds good, being described as a a cross between The Matrix and Interview With a Vampire!) blends science with the paranormal. Doesn't it sound fascinating? (Or, uh, maybe it's just the science-geeky side of me coming out?)
Keeper of Light and Dust will be out in hardcover from Penguin on April 2, 2009.
Posted by Steph Su at 9:39 AM