Review: How to Ditch Your Fairy by Justine Larbalestier + Giveaway Reminder 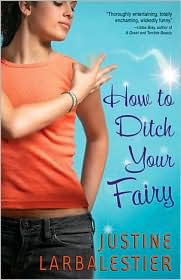 In the city of New Avalon, located in an alternate world, where people have personal fairies who specialize in one particular thing, fourteen-year-old Charlie (Charlotte) Steele is having a hard time. She’s a first-year at the highly prestigious and strict New Avalon Sports High, and she has a parking fairy. She guarantees that whatever car Charlie is in, that car will find the perfect parking space, right when you need it.

A parking fairy is so NOT what a girl like Charlie wants. Not only is it not fun, it also attracts attention from Danders Anders, a slow-minded star athlete who loves to “borrow” Charlie for his car rides. Charlie would much rather have something like an all-the-boys-like-you fairy, the one Fiorenze Stupid-Name has. Stupid-Name is so nicknamed because she is annoying when she attracts attention from all the guys. It gets even worse when the new boy, Steffi, whom Charlie befriends, falls for Fiorenze as well because of her fairy.

How far is Charlie willing to go in order to ditch her fairy? And what’ll happen if she succeeds?

HOW TO DITCH YOUR FAIRY was so much fun to read! Justine Larbalestier does a great job of creating engaging characters who act their age. Charlie is a genuinely relatable fourteen-year-old who worry about making the team and whether or not people like her. The world in which this story is set is fabulous, a success brought forth by the combination of language (lots of slang here, maybe Aussie? Not exactly sure but they add to the book’s atmosphere), description, and quirks (have you ever encountered such a regimented and sports-oriented high school? I didn’t think so). Overall, a story well done and highly recommended.

Don't forget to enter and help me spread the word about my How to Ditch Your Fairy giveaway! Enter to win an ARC of this fun and original book! (Note: the book is out in hardcover now, but I am giving out ARCs, since that is what I have. Toodles.) Giveaway information is here.