Review: Every Demon Has His Day by Cara Lockwood 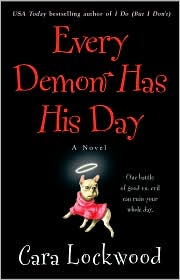 Publication Date: April 7, 2009
Tags: paranormal, chick lit, comedy, Southern, murder, demons
Summary
It all started when Constance’s clumsy husband Jimmy was killed with a screwdriver to the back on the day when she was going to get him to sign the divorce papers. So of course no one in the town of Dogwood believes Constance’s story: that a demon who calls himself Yaman and dressed in refined clothing did it.
Constance knows that her story sounds like make-believe, but just when she begins to doubt her eyes herself, her life gets even weirder. With the help of an angel disguised as a French bulldog who speaks English with a British accent, Constance realizes that she is actually a prophet, one whom Satan and his minions are keen on because she supposedly will have a vision of who will be the mother of the Antichrist. With Yaman and his partner Shadow intent on beating her into submission, Constance definitely needs help.
Unfortunately, help comes in the form of some odd characters. Like her mother, Abigail, an eccentric psychic of the tie-dye crystal-ball sort. Or Father Daniels, who has a penchant for violence. And last but not least, she has Nathan Garrett, Dogwood’s new sheriff and the notorious young ladies’ man who took her virginity and left without a word all those years ago. Unfortunately he’s still looking as good as ever, and there’s no denying the attraction they still have. With this ragtag group of supporters, will Constance be able to stop the destruction of the world?
Review
This paranormal chick lit book is one heck of a fun read! Every Demon Has His Day has a great blend of the supernatural, the ridiculous, and Southern, and the sexy. The conversations that the demons have amongst themselves border on slapstick comedy; in fact, all of the supporting characters are hilarious.
What makes this book really stand out from similar books, though, is how readers immediately come to care for the two main characters, Constance and Nathan. From the moment they are introduced to us, they are three-dimensional, with the passions and fears and disappointments of, say, an intriguing new neighbor whom you’d want to get to know. The attraction between them is sizzling! My only complaint is that we don’t get to see enough interactions between them. But that may only be because I have a slight crush on Nathan, the reformed ladies’ man with the anguished secret but sincere attraction to Constance, now…
Overall, Every Demon Has His Day is a delight to read. Its energetic pace and likable characters will keep your eyes glued to the page. This book is 100 percent fun.

Writing: 3/5
Characters: 4/5
Plot: 4/5
Overall Rating: 3.5 out of 5
Cover Discussion: 2.5 out of 5 - Okay, when I first got this book from Cara, I really didn't like the cover. Hardly seemed like the kind that would attract my attention at the store. But after reading the book, it's really quite appropriate (see: talking French bulldog in a pink sweater). So it's kind of like the cover is an inside joke for only those who get it, i.e. only those who've read the book. So it's cute, in the end. :)
Special thank you to Cara for sending me her book to review!
-
Sound like something you'd want to read? Stay tuned for Cara Lockwood-related stuff coming real soon!
Posted by Steph Su at 10:47 PM