The In My Mailbox meme is hosted by Kristi at The Story Siren! Head over to her blog to see what other bloggers got in terms of awesomeness (i.e. books) this week.

My book-swapping websites were kind to me this week and brought in a whole bunch of books that I am excited to read (after I, uh, clean up my review book pile a bit, though...). 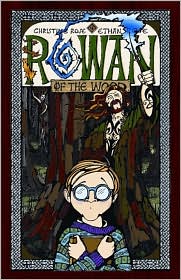 Rowan of the Wood by Christine Rose and Ethan Rose
Rowan of the Wood is the story of Cullen, a 12-year old outcast who lives with an unbearable foster family in California. He travels through the redwood forest every day on his way to school, losing himself in books and the fantasy world of elves, fairies, and wizards. Cullen's life changes incredibly one day when he uncovers an ancient magic wand that is inhabited by a powerful wizard, Rowan. Inadvertently, Cullen releases Rowan from the wand and finds himself possessed by the wizard in times of crisis. Rowan and Cullen try to understand what has happened to them, only to discover they share a deeper problem.
Fourteen centuries ago, Rowan and his bride Fiana were separated on their wedding day. While Rowan was trapped in time, Fiana used dark magic to stay alive and search for her missing husband. Over the centuries, Fiana descended deeper into darkness becoming something evil. Imaginative and poignant, the story of the deep, evolving relationship between Rowan and Cullen enchants the reader and keeps us spellbound throughout the entire adventure.
I received this from the author herself in preparation for a blog tour. Thanks, Christine! It looks very interesting.
From PaperbackSwap:
Socrates in Love by Kyoichi Katayama 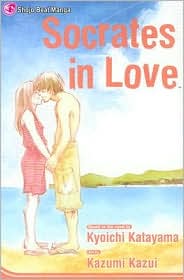 The novel adaptation of the all-time best selling manga in Japan! Affectionately known as "Sekachu" in Japan, Socrates in Love became a national sensation bringing innocent love and romance to the forefront of Japan's ultra-hip mass market.
A sweet high school romance between an average guy and a beautiful girl has just gotten underway. But tragedy ensues when the girl falls ill with leukemia. A bittersweet tale of young love, enduring devotion, and heartbreaking loss, Socrates in Love is a story to cherish and nurture.
It sounds like something far sappier than I would normally read, but I've been intrigued ever since I saw this at Barnes & Noble, like, last year. Now I finally have a copy to read. Has anyone read this yet? 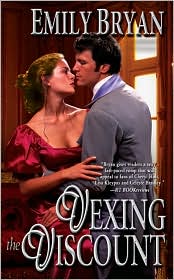 Vexing the Viscount by Emily Bryan
Lucian Beaumont, Viscount Rutland, had to be the most stubborn man in England. Even though Daisy Drake has both the funds and the expertise he needs to find a long-lost Roman treasure, the infuriating man refuses to accept her help. But when Daisy attends a masquerade disguised as notorious courtesan Blanche La Tour, she discovers Blanche is the one woman Lucian can’t resist. So “Blanche” offers Lucian the money he needs if he will accept her “partner” as part of his excavation team. What Lucian doesn’t know but we do is who this new partner is. A refreshingly unconventional hero and heroine, an intriguingly different historical setting, and a surfeit of sizzling sexual chemistry all fall neatly into place in Bryan’s latest splendidly sexy romance.
Yes, yes, it's a romance novel--complete with gaggingly sultry cover and everything--but I saw reviews for this on the blogosphere a couple months ago (there must have been a blog tour or something) and I was interested. So it's my foray into the world of adult mass-market paperback romance! 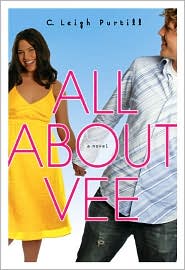 All About Vee by C. Leigh Purtill
Veronica May ("Big Vee") is a bubbly, gorgeous, confident, eighteen-year-old theater actress from Chester, Arizona. She is also two hundred pounds. She puts off college, her life, and her questions about her mother's death twelve years earlier to care for her widowed father. Then Daddy announces that he's going to remarry and Veronica feels replaced. She decides, then and there, it's time for Big Vee to shine! She escapes Arizona and follows in the footsteps of her mother, who was an aspiring actress, to Hollywood. Between shifts with a cute co-worker at the local coffee bar, Vee auditions, falls in love, dumps a toxic friend, learns to deal with love and loss, and finally, finds her place in the spotlight.
Have had C. Leigh Purtill on my wishlist for forever! Plus I'm a fan of that model's brightly colored soft-and-swishy sundress. I am a fan of soft-and-swishy sundresses. They are my clothes-shopping weakness--year-round.

Extremely Loud and Incredibly Close by Jonathan Safron Foer
The Thirteenth Tale by Dianne Setterfield
Yes, I know I used JSF as an example in my "Bias Against YA Lit" entry, but like I said, that doesn't mean the classics aren't good or shouldn't be read. I've heard amazing things about these books.
From BookMooch: 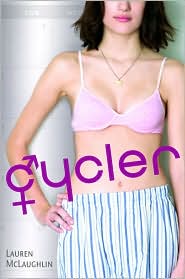 Cycler by Lauren Mclaughlin
AS FAR AS anyone at her high school knows, Jill McTeague is an average smart girl trying to get her dream date to ask her to the prom. What no one knows, except for Jill’s mom and dad, is that for the four days Jill is out of school each month, she is not Jill at all. She is Jack, a genuine boy—complete with all the parts. Jack lives his four days per month in the solitude of Jill’s room. But his personality has been building since the cycling began. He is less and less content with his confinement and his cycles are becoming more frequent. Now Jill’s question about the prom isn’t who she'll go with, but who she'll be when the big night arrives.
Read a review of Cycler on Jenny's blog (uh, if my Alzheimic mind remembers correctly) back when I just started blogging. So I'm looking forward to reading this one.
I Am the Wallpaper by Mark Peter Hughes 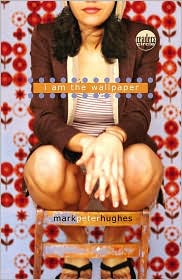 Thirteen-year-old Floey Packer feels like she’s always blended into the background. After all, she’s the frumpy younger sister of the Fabulous Lillian, a girl so popular and spontaneous that their house is always packed with a gaggle of admirers. But when Lillian suddenly gets married and heads off on a month-long honeymoon, Floey decides it’s her time to shine. Armed with her trusty diary, some books on Zen philosophy, and a jar of Deep Wild Violet hair dye, Floey embarks on a self-improvement mission—with excellent results. People are finally noticing her, especially the boy who really counts. But then disaster strikes.

Are people noticing Floey because she’s so fabulous—or because her evil cousins posted her diary on the Internet? And how will Floey ever repair the damage?
From elsewhere: 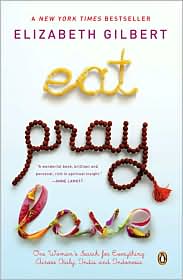 Eat, Pray, Love by Elizabeth Gilbert
One of my roommates bought this for me for my birthday. She said it's "like what I like to read, except for grown-ups." Haha. Gotta love book-giving friends.

The Lost City of Z by David Grann
After stumbling upon a hidden trove of diaries, acclaimed New Yorker writer David Grann set out to solve “the greatest exploration mystery of the twentieth century”: What happened to the British explorer Percy Fawcett and his quest for the Lost City of Z?
I won this during Book Carnival Week! It looks exciting.
Starfinder: Book One of the Skylords by John Marco 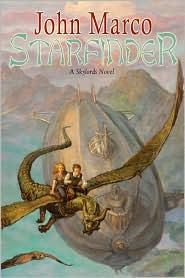 (Publication Date: May 5, 2009)
Steam trains and electricity are rapidly changing the world. Moth of Calio is obsessed with the airships developed by his friend Fiona's grandfather Rendor, and dreams of taking to the air one day like his heroes, the Skyknights.
But not everyone is happy to see humans reach the skies. For thousands of years, the mysterious and powerful race known as the Skylords have jealously guarded their heavenly domain. But Moth and Fiona are about to breach the magical boundary between the world of humans and the world of the Skylords.
Got this from Trish of TLC Book Tours for an upcoming blog tour.

The Little Stranger by Sarah Waters
(Publication Date: April 30, 2009)
I couldn't really find a good synopsis of this, but it's a ghost story set in the 1940s. Got it from Goodreads.
Madapple by Christina Meldrum

THE SECRETS OF the past meet the shocks of the present. Aslaug is an unusual young woman. Her mother has brought her up in near isolation, teaching her about plants and nature and language—but not about life. Especially not how she came to have her own life, and who her father might be.

When Aslaug’s mother dies unexpectedly, everything changes. For Aslaug is a suspect in her mother’s death. And the more her story unravels, the more questions unfold. About the nature of Aslaug’s birth. About what she should do next. About whether divine miracles have truly happened. And whether, when all other explanations are impossible, they might still happen this very day.
I'm so excited to get this! Thanks, Bookworm! :)
From the library: 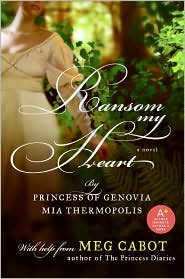 Ransom My Heart by Mia Thermopolis and Meg Cabot
He's a tall, handsome knight with a secret. She's an adventurous beauty with more than a few secrets of her own. Finnula needs money for her sister's dowry, and fast. Hugo Fitzstephen, returning home to England from the Crusades with saddlebags of jewels, has money, and lots of it. What could be simpler than to kidnap him and hold him for ransom?
Well, for starters, Finnula could make the terrible mistake of falling in love with her hostage.
How can you miss this sort of convoluted, outrageous, historical magic realism book by Meg Cabot? I had to read it.
Say the Word by Jeannine Garsee

Dredging up the past can knock the present right off balance.The world expects perfection from seventeen-year-old Shawna Gallagher, and for the most part, that’s what they get. She dates the right boys, gets good grades, and follows her father’s every rule. But when her estranged lesbian mother dies, it’s more than perfect Shawna can take. Suddenly, anger from being abandoned ten years ago is resurfacing along with Shawna’s embarrassment over her mother’s other family. As she confronts family secrets and questions from the past, Shawna realizes there’s a difference between doing the perfect thing and doing the right thing.
Borrowed it for an upcoming blog tour. And it's so good so far! And yes, the model on the cover is for certain the same one who is on the covers of North of Beautiful and Evermore...
Posted by Steph Su at 9:00 AM